Navitas charging into the future 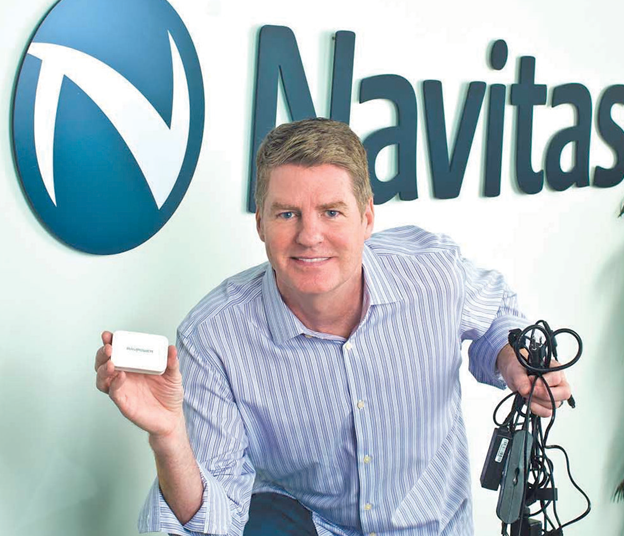 Gene Sheridan is hoping to disrupt the mobile charger industry with a charger that works up to three times faster than conventional devices and is half the size and weight.

Sheridan was born in Washington, D.C. and raised in Poughkeepsie, N.Y. He graduated from Clarkson University in 1988 with a bachelor of science degree in electrical engineering.

He then went to work for International Rectifier, in El Segundo, where he served as vice president and general manager. At IR he was responsible for creating three new divisions, spanning engineering, manufacturing, and marketing.

Sheridan left International Rectifier to serve as CEO of BridgeCo, a start-up semiconductor company that captured 80 percent of the wireless audio market before being acquired by Standard Microsystems Corp.

One of Sheridan’s mentors at IR was William D. Collins, a longtime tech-sector leader, and angel investor.

“Gene has that rare combination of street smarts and interpersonal skills. He knows the engineering and the technology and knows how to form lasting customer relationships,” Collins said of his protege.”Leadership in the tech industry isn’t easy. You’re dealing with very, very smart people and you need to know when to step in and when not to. Gene is very good at getting the best out of those who work for him.”

“My goal is to tap into and develop the talent of the people who work for us. To do that you have to speak their language in a respectful and collaborative manner,” Sheridan said.

At the heart of the Navitas’ charging technology is the use of gallium-nitride in place of traditional silicon. Its GaNFast power integrated circuits enable systems to run up to 100 times faster than silicon-based chargers. Sheridan says the GaN charger delivers three times greater power density, 40 percent greater energy savings and a cost savings of some 20 percent.

But because the tech industry has been using silicon for so long, getting it to adopt GaNFast devices is a challenge, Sheridan said.

“That’s why I’m in our offices in Asia one week a month. Our overseas customers see the benefits but switching to gallium nitride will take some investment on their part and that’s going to take time,” Sheridan said. But he’s confident that one day soon, GaNfast chargers will be the industry standard.

“I don’t see anything limiting this technology’s growth,” Sheridan said.

Martin Kuball, a professor of physics at the University of Bristol in the United Kingdom foresees all-electric cars using GaN chargers.

“It would make them more efficient and give them a longer drive range,” Kuball said in an online video interview.

Kuball’s research shows that GaN only uses 1 percent of the energy the device converts. Silicon devours as much as 3 percent.

“That may not seem like a large number, but it is,” Sheridan said. “Think of the national energy savings that could be achieved.”

GaNFast device chargers are now available on Amazon, under such names as ANKER and AUKEY. Most are under $50.

Sheridan says the GaNFast revolution will occur after he convinces one of the major smartphone makers to adopt his technology.

“We want GaNFast to be in the box,” Sheridan said. “Once it’s there no one will go back to a charging system that takes two hours.”

“We’re in an ‘e-mobility’ trend – from cars to bikes and scooters, to tablets and laptops. It’s our goal to power all lithium Ion batteries with GaNFast ICs to keep up with that trend,” Sheridan said.

In addition to his Navitas Semiconductor responsibilities, Sheridan serves as executive chairman and co-founder of San Jose-based Empower Semiconductor.

Empower is a power management company with a global client base that offers technology platforms that improve cost, footprint, power consumption and performance for digital and mixed-signal integrated circuitry.

Sheridan spoke at the Consumer Electronics Show in Las Vegas and this month headlined the national Applied Power Electronics Conference in Anaheim.